This blog is mainly about random things I like or have a strong opinion about. It’s not meant to be taken so seriously. …

END_OF_DOCUMENT_TOKEN_TO_BE_REPLACED

Save the Date to Save Net Neutrality

Your internet connection might slow down after December 14th.

On that day, the FCC will vote on Ajit Pai’s proposal to reverse Title II in the Communication Act. Title II ensures that the government monitors all ISPs, so they cannot throttle your connection or charge you more money. If Ajit Pai’s plan passes, then internet providers will be able to block or slow down whatever websites they choose.

This could potentially cause a lot of websites to lose traffic and revenue, and it changes the freedom of the internet.

Since only five people on the FCC can vote (and there’s a good chance that the three Republicans will vote for Pai’s plan), it’s up to the public to stop it. We protested for net neutrality back in July, and now we’ll do it again.

via Save the Date to Save Net Neutrality | vpnMentor

Internet censorship is growing around the world, and it’s happening in America too. Ajit Pai, the chairman of the FCC, wants to change the law and give internet providers freedom over what they offer, basically taking away our net neutrality.

Thank you Sophia for bringing this to my attention. 🙂

First was Texas, then Florida and now Puerto Rico. 😯 This hurricane season has been unprecedented so far. 😮

Men walk past downed trees after the passage of Hurricane Maria, in San Juan, Puerto Rico, on September 20, 2017. Maria made landfall on Puerto Rico’s southeast coast around daybreak, packing winds of around 150 mph (240 kph). – The Atlantic

I’m speechless about how bad this hurricane really it’s been for PR. 😶 They are saying that power might take as long as six months to be back in service. Communications also are down, making it almost impossible to reach families and friends on the island. 😮

There is a broken dam in lake Guajataca in the town of Isabela that had brought a catastrophic flood. 😫

Donations and help for victims are found all over the Internet from different organizations.

It is going to take many years for Puerto Rico to recuperate from this tragedy. 😥

Not to mention they were already having a bad economic crisis. 😦

July 12th: Internet-Wide Day of Action to Save Net Neutrality 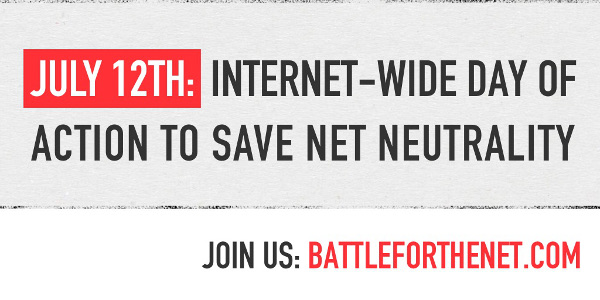 The FCC wants to destroy net neutrality and give big cable companies control over what we see and do online. If they get their way, they’ll allow widespread throttling, blocking, censorship, and extra fees. On July 12th, the Internet will come together to stop them.

Protect the Internet from these corporations that want to control and change how we use the Internet. 😡

Today is the day to make a stand for Net Neutrality. 🙂

Wow… 😦 Adam West was the Batman that started it all for me. 😥

I remember as a kid watching the ’66 Batman TV Series reruns and loving it. ❤

Recently I’ve been enjoying the series box set, the new comic books, and his comeback as Batman with the Batman: Return of the Caped Crusaders. 😐

I also remember West as The Gray Ghost in the Batman: Animated Series ❗

Adam West still one of the best Batman of all time, and the third on the best Batman in my poll. 🙂 His influence and contributions to the Batman legacy will not be forgotten for year to come. 😦

Last weekend I was bombarded by comment spam on this blog. 😮 It seems that the Akismet spam filter got caught off guard with a new style of flood spam spreading for the past few weeks. 😯

The WordPress forum has people talking about the latest comment spam going around.

Luckily I was able to block those IP addresses and it’s been working so far, with 466 spam already been blocked and reported. 😎

Sorry for the inconvenience, and I hope no one else is going through this. 😦

RECLAIMING Their VOICE: The Native American Vote in New Mexico & Beyond

It just amazes me how people in power are always looking for some way to cheat the system by silencing the Native Americans and disrespecting their voice. They love to keep destroying the land by adding roads and buildings with no regards, just in the name of progress and profits. 😡

After all the horribly grotesque history Native Americans had to endure in this country, the 21st century still treating them/us like third class citizens. 🙄

“We owe the Native American people so, so much.”

We need to find a way to stop supporting these rich corporations and their two-party system that have a big hold on the voting process. 👿

Chuck Berry, legend who formed the bedrock of rock ’n’ roll, dies at 90

Chuck Berry was the father of rock-and-roll… period. He influenced millions of musicians including myself.

He was a great influence on me as a guitar player. I don’t think rock-and-roll will have started the way it did without him. Even most of my favorite guitarists like Rory Gallagher, Ace Frehley, Jimi Hendrix, Keith Richards, Eric Clapton, etc, will not have sounded the way we know them today. He will be greatly missed. 😥

I learned how to play Johnny B. Goode from the Jimi Hendrix Plays Berkeley film. After that I started learning and buying many of Berry’s songs and albums.

You can see some Chuck Berry moves and playing style on this Jimi Hendrix video. 🙂

One of my favorite movies to watch on this season is The Mask Of The Phantasm.

You can’t expect to win an election by throwing away progressives and insulting half your base. 😡

Welcome to the blame game!

Of course, we knew they were going to blame Bernie Sanders and Jill Stein for taking away the progressive vote. 😆

They are also blaming Gary Jonson, James Comey, Russia, Sexism, and everyone that didn’t endorse or vote for Clinton. 🙄

The true blame really lies on Hillary Clinton and her corporate supporters. She bought the Media and the DMC, to set the stage for her coronation.

The DNC already knew who their candidate was going to be before Sanders announced that he was running for president, and they pulled the scales against him. 😡

Despite all this, Sanders support was so strong that he was having crowds hundred times larger than Clinton. He only lost by the obvious intervention the Media and DMC made for Clinton. 😮

And now that Trump won the election they don’t dare to look at the facts why they lost.

So sure, Sanders or Stein sounds like a good place to pass their blame. 🙄

I didn’t vote for Donald Trump or wanted him to win. But I have to say, as bad as all this might look now, there was not really good outcome between them two. The outcome of Clinton winning would have been equally bad. 😈

We now need to focus and fight back against Trump. The corporate liberals and the right-wing nuts should be our starting point, by pushing them out of our government. 👿 No more listening and getting seduced by Obama sweet talk of peace while he benefit Wall Street and his donors.

The Greens and Sanders revolution will continue the fight even stronger now that we know what kind of people Trump is adding to his cabinet. 😮

The Green Party didn’t get the goal set for federal funding. 😦 But there were some victories in some states counties. 🙂

After all this, it looks like the corporate Democrats still doubling down on their ways and still prefer the establishment over their progressive voices. 🙄 They have elected Chuck Schumer for Senate Minority Leader, and they are pushing for Howard Dean for the DNC Chair instead of someone that is more progressive like Keith Ellison.

It is obvious that the rich fat DNC establishment have a strong hold on the party and don’t want to learn the lesson that money in politics is one of the reasons why they lost. 😯

This is why I’m staying with the Green party or any other third parties that reflects my views. 😐

I’m hoping for Sanders to make the DNC realize the error of their ways and reform the party. At the same time I’m worry that the Democrats are just using Sanders to just get votes.

Sorry for this late old post… This post it’s been on drafts since the election results. I’ve been extremely busy with work and family and I didn’t have the time to post it in time. Still busy, though… 😦

First Day of FallSeptember 23, 2018
Fall is here.
First Day Of WinterDecember 21, 2018
My favorite season is here!
SeaMonkey AnniversaryJuly 2, 2018
On July 2, 2005 SeaMonkey would officially become the name of the Internet suite superseding the Mozilla Suite.
When Is Batman’s Birthday, Actually?March 30, 2019
Based on historical data from the Registrar of Copyrights, DC Entertainment recognizes that the world’s most popular Super Hero — Batman — was first introduced to the public 75 years ago on March 30, 1939, in Detective Comics #27. It was common practice in 1939, and remains so today, for publications to go on sale prior to their indicated cover date. Thus, while the Bat-Man (as he was then known) first appeared in the May 1939 cover-dated issue of Detective Comics #27, that issue actually hit newsstands on March 30, 1939.
The End Of My-OperaMarch 3, 2014
Presto, Opera & My-Opera are Over. R.I.P.

The flight of tomorrow

Support The Scene You're A Part Of

Walking over sky, following a bird...

"I belong to no organized party. I'm a Democrat." - Will Rogers

I Know I Made You Smile

Glimpses of a Creative Universe, by Christopher Chase...

Politics is war without bloodshed.

The latest news on WordPress.com and the WordPress community.

A Year On Market

A photograph every day for a year on Market Street.

A plain language guide to grammar, punctuation and writing well

Tapping Away in the Middle of the Night

Addressing each of my life choices one at a time

This WordPress.com site is the cat’s pajamas

peering into the underworld

Life as it was reported back then